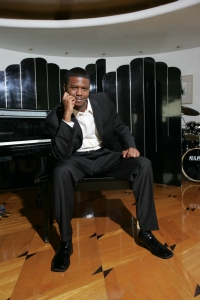 Jermaine Griggs founded Hear and Play Music at 17 years old in August 2000 with the goal of changing the way the world learns music. Started years earlier as a side project helping kids in his church play gospel music, it spread like wildfire morphing Hear and Play into an international hub for ear-musicians everywhere.

While Jermaine initially took on the role of the primary instructor in the early days, he has since combined forces with the world’s best gospel musicians like Jason White, Michael Bereal, Jonathan Powell, Jason Freeman, and others, and produced a range of programs specializing in praise, worship, shouting, contemporary, and urban styles.

As visionary, he is charged with the responsibility of keeping the vision plowing ahead and has continued to be on the cutting edge of music instruction with video, audio, and software programs all aimed at ear-musicians.

He is married to his high school sweetheart of eleven years and has three children (Jadyn, Layla, and Brendan). He is a graduate of University of California, Irvine, and currently resides in Orange County.